We are learning from Industry and sharing with You

Posted at July 15, 2022 in Know How, Optical Transceivers by EDGE Technologies
1 Like

Interconnections made using fiber optic cables are currently the most popular type of medium for use in telecommunications networks. The need for additional bandwidth is rising because of the growing popularity of streaming media, social networking, and cloud computing. This demand is driving networking speeds to greater horizons. When communicating at high speeds, such as 100G Ethernet and above, it is possible for transmission errors to arise because optical receivers struggle to differentiate between signal and noise as the amount of noise in the environment grows. The process of controlling errors that take place during the transmission of data through unreliable or noisy communication channels is referred to as Forward Error Correction or FEC. In this article, we will go deeper into the topic by answering questions such as “What is FEC?”, “What are the pros and cons of using FEC?” and in the “Good to Know About FEC” section, we’ll talk about what you need to pay attention to when using FEC, including whether 100G FEC is different from 400G FEC, how PAM4 FEC is different from NRZ FEC, what RS-FEC 25G is, and whether FEC processing is done on the module or in the host device. All of this should be relevant to modern optical communication links.

Our world is full of noise. Noise affects everything, including data transmission and communication systems, and there is no way to escape it. The receivers of optical communication systems are directly impacted by noise, which makes it more difficult to understand the information that has been received. Technically speaking, noise has an effect on the optical intensity of the wave as it is transmitted through an optical fiber, and optical dispersion creates noticeable defects in the signal when it is transmitted over a long distance. Whenever there is an impact from noise or optical dispersion distortion, the optical pulse suffers degradation and loses its meaning as either 0 or 1. The receiver takes the optical pulse it receives and converts it to voltage. When the receiver does so with too much noise it interprets the data incorrectly, reading either 0 as 1 or 1 as 0 bit. Obviously, in a perfect system, there would be no noise, and the receiver would be able to correctly recognize bits 0 and 1 as they were transmitted. However, this is not the case in the systems that exist in the real world.

FEC, which stands for Forward Error Correction, comes into play at this point because it lessens the effect that noise has on the transmission quality of optical transmission systems. By adding overhead information to a stream of bits before transmission, this method is able to detect and correct a portion of the errors that may be present in a stream of bits. The data block is subjected to specialized functions, and the output of those functions is the generation of parity bits. Overhead consists of redundant bits, which also contain parity bits. After that, the initial data block and these new data are joined together, and the FEC codeword is produced as a result. Following that, this FEC codeword is sent along the transmission line. 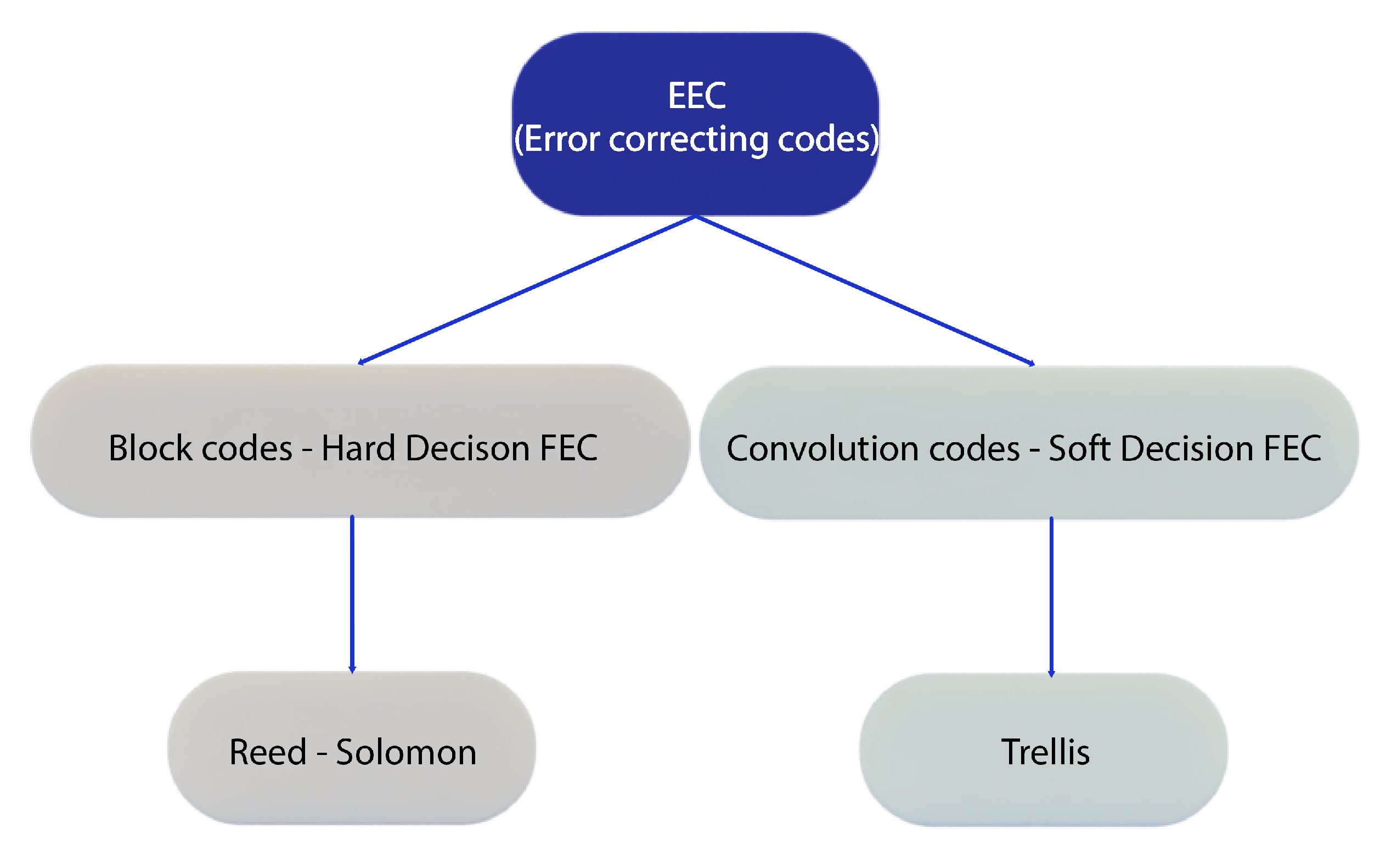 Convolutional codes are used in Soft-Decision FEC algorithms. They work with variable length symbol streams and introduce confidence factors for 0 or 1 decisions. This means that the receiver can interpret a bit as 0 or 1 based on the amplitude of the signal if it is in the 0 confidence interval or the 1 confidence interval. These codes increase the overall distance reachability of an optical transmission system by 30-40%. Thus, Soft-Decision FEC has a disadvantage: it increases overhead by 15-30%. Hard-decision block codes are three times as large. The Soft-Decision FEC algorithm branch includes Trellis error correction codes.

Reed-Solomon error correction codes are the most widely used error detection mechanism in today’s telecommunications industries. Reed-Solomon codes operate on a data block represented as a set of finite-field elements known as symbols. Reed-Solomon codes can detect and correct a variety of symbol errors. The two most common FEC schemes in today’s telecommunications links are RS-FEC (528, 514) and RS-FEC (544, 514). The RS(544,514) FEC is used on 400G PAM4 transceiver links and 100G PAM4 (CAUI-2) links; while RS-FEC (528, 514) is being used on 100G NRZ links. The following is the distinction between the two RS-FEC schemes: – RS-FEC(528,514) encoding begins with a 514-symbol data field with 10 bits per symbol and adds 14 parity symbols to form a 528-symbol encoded codeword. However, the RS-FEC (544, 514) uses 30 parity symbols to form a 544 symbol encoded codeword. Because PAM-4 signals have a tighter spacing between voltage levels, the eye amplitude is one-third that of a similar NRZ signal, it is slightly larger and uses more overhead. As a result, the SNR of the PAM-4 signal is reduced and it is more susceptible to noise. To compensate for the lower SNR, KP-FEC is designed with a higher coding gain. KP-FEC has the potential to correct up to 15 symbols per codeword, whereas KR-FEC can only correct up to seven symbols.

As the weather is not always bright and sunny, using FEC (Forward Error Correction) has a couple of drawbacks to be aware of. In this section, we will look at the pros and cons of FEC-enabled links.
Let’s start with the..

Overall, the benefits of using Forward Error Correction in most of the scenarios outweigh the drawbacks, but it is not relevant for every transceiver. FEC implementation and use are typically determined by the system in which the transceivers are used, as well as the type of module itself.

Good to Know About FEC

Matching FEC on both sides of the Link

Reed-Solomon Forward Error Correction is used in many 25G SFP28 transceivers to increase the range in 25G-CSR, 25G-LR, 25G-ER, and BIDI scenarios.

Except for 100GBASE-LR4 and 100GBASE-ER4, which use LAN-WDM transmitters and can achieve required distances of 10km and 40km without the need for FEC, all 100G NRZ modules to achieve maximum reach require RS(528,514) FEC enabled on the host platform.

To achieve best performance FEC (544,514) must be enabled on the host device for 400G QSFP-DD modules based on PAM4.

To summarize, with current events increasing system bandwidth and overall network speed, error correction must be considered when transmitting over longer distances. Forward Error Correction enables you to receive a high-quality signal without interruption from noise, which distorts the signal, and it can provide a longer transmission distance from lower-cost components. The FEC technique is already a hot topic, but we can expect it to become even more popular as speed and optical modulation techniques will advance.