Posted at October 10, 2022 in Technical Questions by EDGE Technologies
13 Likes

There is a 100G QSFP28 transceiver for any distance requirement: starting from a close quarters connection in a datacenter to long distance connections to nearly 100 kilometers to 100G Lambda. Altogether there are a lot of 100G QSFP28 variants, but the main ones are SR4 (Short Range, 100m), CWDM4 (2km), LR4 (Long Range, 10km), ER4 (Extended Range, 40km) and ZR4 (80km). Most 100G QSFP28 transceivers follow virtually the same hardware configuration (with an exception of SR4).
The differences come into play when longer distances need to be achieved. If compared to LR4 and ER4 distance 100G QSFP28 transceivers, ZR4 distance transceivers additionally have a Semiconductor Optical Amplifier (SOA) in their receiver side to enhance the received signal and KR4 (RS(544,528)) Forward Error Correction (FEC) to correct any received symbol errors. Both are needed due to the long distance of ZR4 (80km or in ZR4+ case, 100km), as the signal weakens because of dispersion and is somewhat scrambled. A table with EDGE transceiver examples can be seen down below. 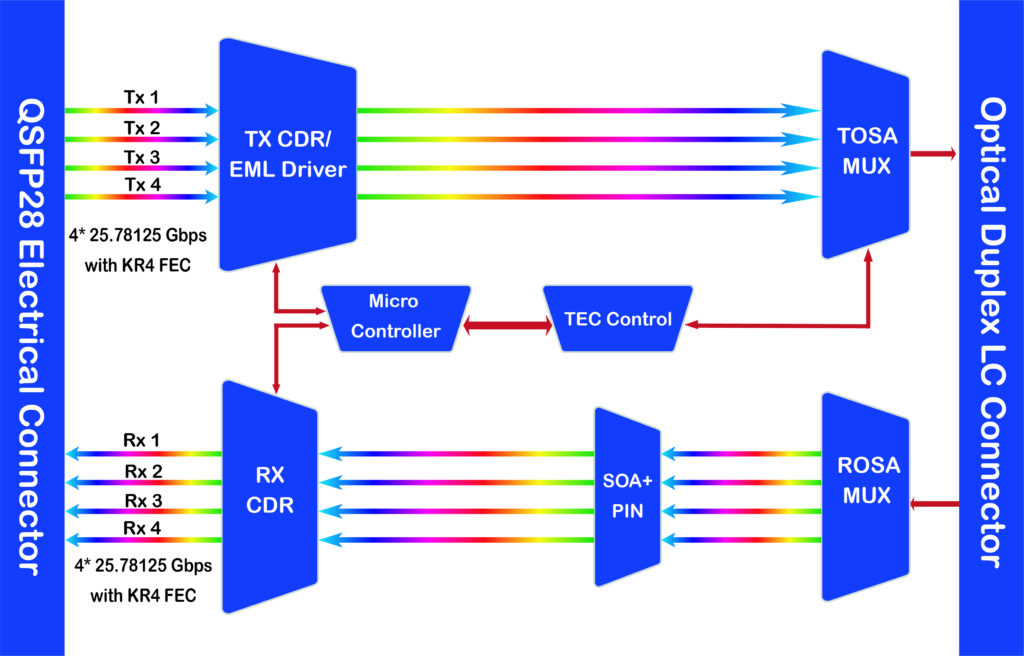 For example, SR4 transceivers are employed in data centers, where short distance transmissions up to 100m must be fulfilled. LR4, ER4, ZR4 and ZR4+ transceivers, which are capable of reaching from 10km to nearly 100km are meant for more spaced apart locations, where the distance between these locations still needs to be accounted for, as LR4 can be too weak for 30km, whilst ZR4 may result in hardware or signal related defects. Lastly, the step up from SR4 to LR4 is a significant one, thus an intermediate solution of CWDM4 for ranges between 100m and 2km comes into play, bridging the gap for midrange connections.

Although the hardware solution for nearly all 100G QSFP28 transceivers is virtually the same, some differences appear when longer distances need to be achieved. If compared to LR4 and ER4 distance 100G QSFP28 transceivers, ZR4 distance transceivers additionally have a Semiconductor Optical Amplifier (SOA) in their receiver side to enhance the received signal and KR4 (RS(544,528)) Forward Error Correction (FEC) to correct any received symbol errors. Both are needed due to the long distance of ZR4 (80km or in ZR4+ case, 100km) as the signal weakens because of dispersion and is somewhat scrambled. A table with EDGE transceiver examples can be seen down below.

100Gbps data links are the main transmission types in nowadays networks. Currently, the most popular 100Gb/s optical standards such as 100GBASE-LR4, 100G-CWDM4, 100G-PSM4, rely on 25 Gb/s optical lanes that align with 25Gb/s SERDES commonly modulated with NRZ and used on ASICs for the switching, routing and transport applications. As ASIC SERDES increase in speed, it is necessary to increase the optical channel speeds to avoid additional cost that comes from needing to translate to slower speeds. Cost savings can further be realized by reducing the number of optical lanes and increasing the speed from four times 25Gb/s per lane to a single lane of 100Gb/s.

It has been recognized by the IEEE and the members of this MSA that a single optical lane of 100Gb/s can be at least 40% lower cost than four lanes of 25G. The MSA members expect 400 Gb/s specifications defined by the MSA using 100Gb/s per optical channel will be much more conducive to high density, and lower cost, implementations in module form factors and networking systems.

For single mode fiber each lane has its assigned wavelength (like CWDM4 or LAN-WDM) and as well one of the four lasers and receivers.
100G Lambda MSA standardization organization has standardized 100G Single Lambda transceivers. These transceivers process 4 x 25G electrical NRZ modulated signals from the host side via a built-in discrete DSP (Digital Signal Processor) using PAM4 (4 level Pulse Amplitude Modulation).Then these signals are feeded to the new modulated signal into one single laser at the speed of 100G. Due to the fact that this kind of solution requires only one laser, it hugely saves transceiver manufacturing cost.
Specified for up to 500m, single-lambda started with 100GBASE-DR, followed by 100GBASE-FR for up to 2km and 100GBASE-LR for distances up to 10km.

In general PAM4 transceiver has the following benefits if compared to simple double fiber LR4 or ER4 transceivers:

Transceivers use frequency modulation to send and receive data. Non Return to Zero (NRZ) is a modulation that uses two voltage levels to represent logic 0 and logic 1. NRZ has been used in Ethernet from speeds up to 100Gbps. But now we have already been able to see PAM4 in action. PAM4 is a modulation following NRZ, which stands for Pulse Amplitude Modulation level 4. In this modulation technique two bits of data are encoded with four distinct signal levels, hence the name 4 level modulation. Read more about our article on PAM4 vs NRZ

We provide 100G BIDI transceivers both with NRZ and PAM4 modulations. Each BIDI 100G module has a LC connector and is used in a pair with the specific BIDI on the other side. These transceivers operate in different transmitting and receiving wavelengths, for example, our BiDirectional 100 Gbps transceiver over 20km A side has a wavelength of 1271 nm at the transmitter and 1331 nm at the receiver. The B side is the same, but the wavelengths at the Tx and Rx are vica versa from the A side. Below can be seen the BIDI 100G NRZ and PAM4 block diagrams and how these both technologies differ in hardware:

NRZ modulation can be seen in many networks nowadays, but as PAM4 is a relatively new technique in usage, there have been questions coming to us whether transceivers with NRZ need to be changed with PAM4?

Overall with 100G data rate transmissions both NRZ and PAM4 techniques can be used. The answer comes down to whether your equipment can support PAM4 modulation, whether you are up to the costs and what would be the operation distance. NRZ will be more cost efficient, PAM4 will allow more data to be transferred.

For any requirements and information be sure to contact us!